The long wait is over. The Food and Drug Administration has approved ipilimumab – the first drug ever proven to prolong survival in stage IV melanoma – in a down-to-the wire decision announced by the agency on March 25.

The approved indication in unresectable and metastatic melanoma comes with a risk management plan addressing life-threatening toxicity associated with the new immunotherapy, as was seen in a pivotal clinical trial conducted in previously treated patients.

Ipilimumab is the first FDA-approved treatment “to clearly demonstrate that patients with metastatic melanoma live longer by taking this treatment, Dr. Richard Pazdur, director of the Office of Oncology Drug Products in the FDA’s Center for Drug Evaluation and Research, noted in the announcement.

It is being marketed by Bristol-Myers Squibb under the trade name Yervoy. The approved dose is 3 mg/kg administered intravenously over 90 minutes every 3 weeks for a total of four doses. That the FDA did not specify a line of therapy “is extremely important and … will open the floodgates to this drug,” Dr. Jeffrey Sosman, Ingram Professor of Cancer Research, professor of medicine, and director of the melanoma program at Vanderbilt University, Nashville, said in an interview after the announcement.

“Most people with metastatic melanoma will see this drug,” said Dr. Sosman, coauthor of the pivotal trial and associate editor of The Oncology Report. The indication does not exclude untreated patients, he noted. A monoclonal antibody administered intravenously, ipilimumab blocks cytotoxic T-lymphocyte antigen (CTLA-4), a molecule that the FDA said “may play a role in slowing down or turning off the body’s immune system, affecting its ability to fight off cancerous cells … [and] may work by allowing the body’s immune system to recognize, target, and attack cells in melanoma tumors.” It is being studied in other cancers as well.

To read more, clink on link below... http://www.internalmedicinenews.com/news/oncology-hematology/single-article/fda-ipilimumab-approved-for-metastatic-melanoma/fac9757e1b.html
Posted by Christina at 9:02 PM 3 comments:

I am now at peace with the fact that I'm moving onto a new treatment (even though I'm nervous about it too) and have found many things that I WON'T miss about the old treatment. For example...(and in no particular order)
1. Inpatient hospital stays: this has a whole list of it's own. Should I name them all? Yes. I won't miss yucky hospital food, throwing up/nausea, the "dog" (pole of meds), scratchy sheets/blankets, chills and body aches, blowing up like a balloon, feeling my heart race, and most importantly, being awakened every 2 hrs to check my vitals. (I do have say though, the nurses were amazing and having my parents there with me made all the difference!)

2. Increased mucus production and bloody mucus. I know, yuck. But I've dealt with it everyday for um, 9 months now and I'm kinda sick of it! (Not to mention going through a box of kleenex every 3 days!)

3. Self injections of IL-2 each night on my stomach and legs. No more lumps and bumps!

4. The general feeling of being wiped out every day.

5. The sleeplessness/insomnia issue that comes right after treatment (we think it's because my sleep cycles are disrupted in the hospital).

6. Being gone from my family for almost a whole week every month (now I will be just gone a couple days every 3 weeks for 3 months and then after that, only every 3 months!).

7. Feeling bloated and constispated after the hospital and having to lose 15-20 lbs of water weight.

8. Super dry skin. I've tried so many moisturizers and nothing does the trick all day.

9. Lastly, getting PICC lines put into my arm every treatment. I have had 10, count them, 10 and let me tell you, it's not a cake walk getting that little procedure done! My veins have had it and arms are starting to look like I'm a herroine user!
Posted by Christina at 3:23 PM 1 comment:

I had my scans last week and felt at peace with things, but there was something inside of me that made me wonder and worry. I kept thinking that the scan results wouldn't show any progress, and just stable disease. Well, I was right. My doctor told me that the tumor left in my lung hadn't shrunk at all since Dec. The good news is that there are no new tumors to be found and that the tumor hadn't grown, but the bad news is that stable disease usually means that eventually the tumors will come back and grow again. It also means that the melanoma has built up a resistance to the treatment I am on (dang melanonma!). So, the next step is to complete one last course of my current treatment (instead of continuing 8 more treatments) and start a new treatment in a month.

The new treatment drug is called Ipilimumab which is an immunotherapy that activates or stimulates the immune system to clear cancer cells (explained in a nut shell). It is on the brink of becoming FDA approved for metastatic melanoma, and will be the first drug to be approved in over 16 years. This drug is very promising and has had great results in about 20% of patients. I only hope that I will be one of those patients!

For now, I am trying to remain positive and hopeful for the future. My emotions are mixed. On one hand I feel disappointed that I wasn't a "complete responder" to the treatment I was on and feel like a failure for not finishing. Melanoma is a tough cancer to beat, and it's discouraging to know that everything I've done to kick this thing in the can hasn't done the job yet. On the other hand, I'm actually relieved to be done with this treatment though because it has been intense and brutal and the new treatment will be much easier to handle (although there are still side effects). The bottom line is I gotta keep on truckin'. I have to believe that something will work and I will still be here!
Posted by Christina at 10:29 AM 5 comments:

Back on the bike 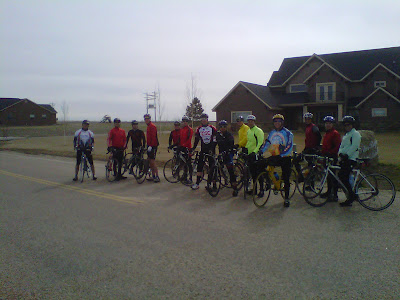 I think I'm officially crazy. Like for real. Yesterday I decided to go out for my first ride of the season with a bunch of guys. And I was the only girl. Yeah for me, right?! Wrong. We did a 35 mile loop, which the first 20 miles weren't bad, but the last 15 I struggled to keep up. The first hill we hit my left leg cramped up bad and after that, I just didn't have any steam anymore. But there were some guys that stayed back with me and for that, I'm grateful.
I will say that I felt kinda cool being the only chick out there, not to mention the only one fighting cancer. And I have to give myself some credit. My exercise routine is still inconsistent with the treatments I have every month, so to go out and ride like that is really pretty good, I think. I guess I did it because in a few days I have CT scans and I needed to clear my head. And being on my bike is one of the best ways to do that!
Posted by Christina at 4:10 PM 2 comments:

I have scans next week and I'm kind of nervous. Ok, a lot nervous. Mostly because I'm worried with all the sickness I've had, my immune system hasn't been fighting as well as it should. And I'm not doing the full regime of treatment anymore, so it makes me wonder if the drugs I'm on are enough to do the job and kick this cancer right out of me.
That one little tumor left in my lungs better be shrinking still. It's going down whether it likes it or not! A friend once reminded me, "I might have cancer, but cancer doesn't have me." This sums up how I try to live my life now!
Posted by Christina at 12:42 PM 1 comment: 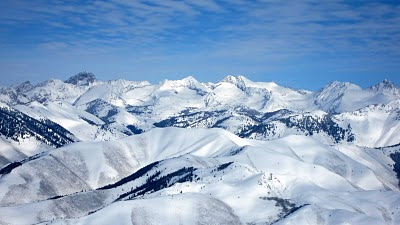 When I'm surrounded by God's creations, it's like the whole earth goes quiet and still. At that moment, I feel happy and peaceful about life. Being in nature, especially on a mountain top overlooking other glorious, snow-capped mountains on a cloudless, blue sky day is a reminder to me that God is in control and that He loves me. Sometimes I think we get busy with our lives, running around, stressing out over the little things, when we just need to stop and smell the roses! I'm grateful for these reminders because I know ultimately, no matter what I do to try to be healthy and heal, God is in control. My life is in His hands! I'm trying to trust in this and remember how much I have to be grateful for!
Posted by Christina at 12:47 PM No comments:

Wow. I think I just caught the worst cold/sinus infection I have ever had. In my entire life. Seriously. I think my immune system took a major hiatus and decided to throw everything at me this week. Sore throat. Fever (for 6 days, off and on). Body aches. Chest cough. Sinus pressure and conjestion. And major FATIGUE.

It started while Eric and I were in Sun Valley on a little weekend getaway. I developed a sore throat and cough while there and then Sunday once we got home, the fever started. By Tues night, my fever had reached 103.5 and we almost went to the hospital because we couldn't get it down. I was miserable! On top of it all, I struggled sleeping mostly because I would wake up coughing or needing to relieve my sinus conjestion. Fun times!

I'm finally doing better, still have a lot of mucus, but at least I'm not dealing w/ the other stuff. And I'm back to sleeping well. Oh, how I have missed you sleep!
Posted by Christina at 12:34 PM No comments: 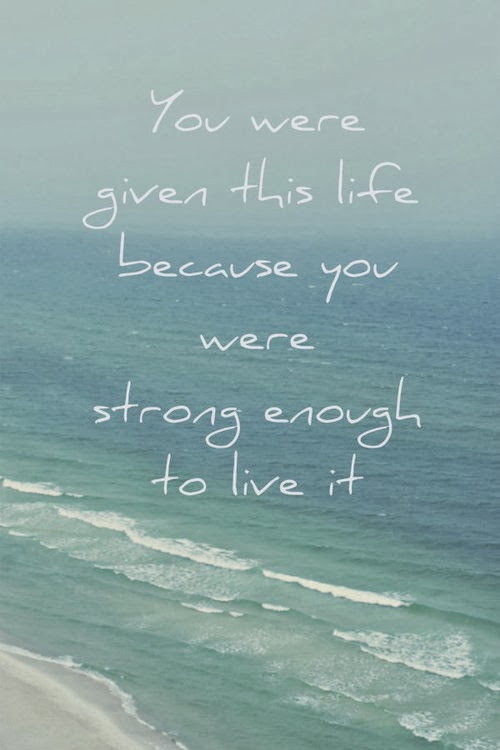 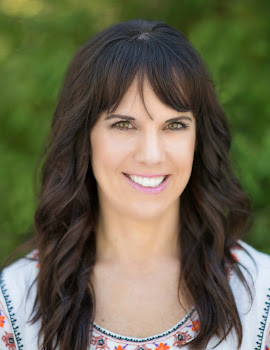 My incredible journey as a mom and wife as I fight and BEAT Stage 4 Metastatic Melanoma!

Who I fight for! 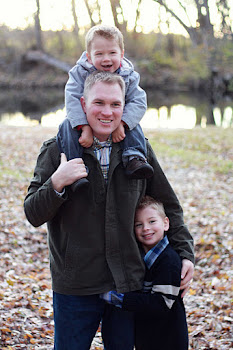 These three boys are my LIFE!

On the home front...

Quotes that inspire me 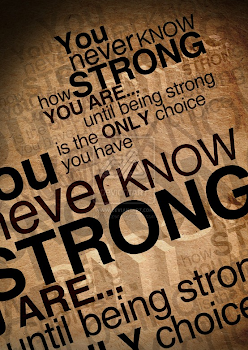